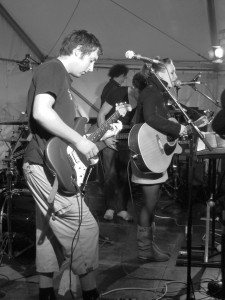 So precisely 12 months after the “once-off-never-to-be-repeated-just-this-year-only” Music on the Marr Festival, organised by Geltsdale Arts in Castle Carrock, came the second in what we hope will be a long-lived series of celebrations of rootsy live music. Building on the success of last year’s festival, this year’s was stretched over two evenings, rather than one, was set in a larger marquee and was prey to squally weather, rather than the glorious sun of 2010. What did not change was the marvellous range of music on offer in both the parish church and the main tent, the beautiful village green setting and the tangible enthusiasm of audience, performers and organisers alike.

One other theme consistent with last year was the considerable array of Cumbrian talent to be seen and heard, some of it encouragingly youthful. Back from last year and now showcased in the main marquee were the maturing songs and keyboard skills of William Howard student Katherine Pickering and the very fine guitar playing of the laconic Ethan Thomas from Appleby. In 2010, they both played in the Young Musicians’ Showcase in the church. This year an equally impressive roster of youngsters was given the opportunity to shine – the singing of Kathryn Weaving and Ophelia Appleby was particularly delightful. Perhaps they’ll make it to the marquee next time!

Also making some outstanding music in the church were the combined talents of Keswick-based Stooshie, whose name (a Scots word for an uproar, a commotion, a fuss, a row or a brawl) rather belied the fiddle-driven sweetness of their sound. Over in the marquee the more established performers were to be found. Friday evening kicked off with the sensitive songs of Alston’s Rory McLeod, who had mislaid the remainder of last year’s headliners Tarras, but seemed to be enjoying himself nonetheless. After the aforementioned Ethan Thomas, we were treated to some strong earthy singing from Carlisle’s Nicola Reed, ably supported by Mike France, whose fretless bass playing is a particular pleasure. At that point the volume and pace altered drastically with the arrival of Alstonbased Room Full of Owls, whose driving and inventive “alternative” folk was clearly one of the weekend’s highlights for many people, prompting a welldeserved standing ovation from the whole audience . The band possesses a startlingly talented lead singer in Fiona Clayton, whose feisty voice soared above the musical mayhem to great effect. 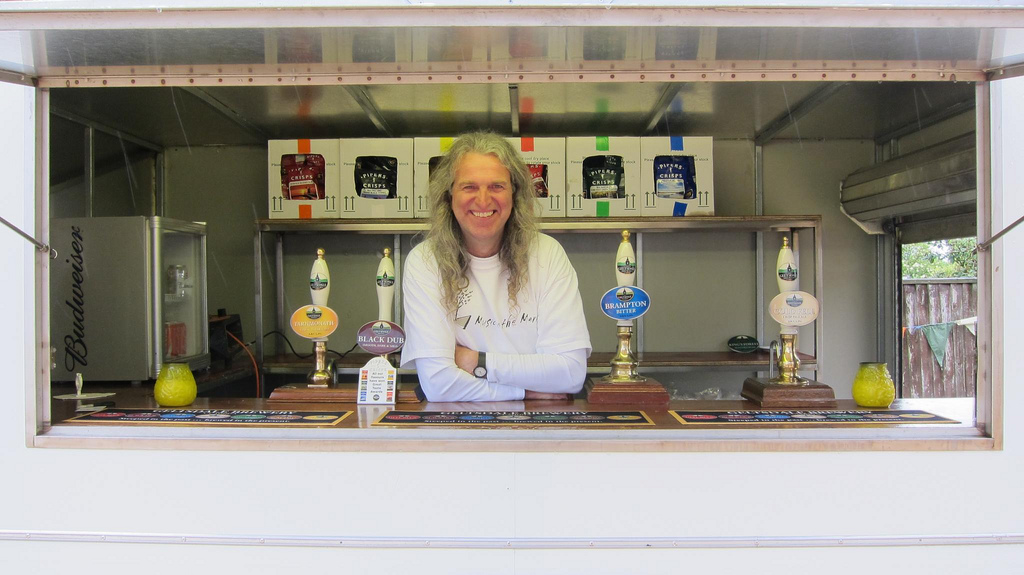 There was also little sitting down for Friday’s headliners the Newcastle-based Baghdaddies! Imagine Madness performing the Sand Dance and you’ll have some idea of the sound and sight of these remarkable live performers. Saturday afternoon was topped and tailed by three of Britain’s finest talents. Bob Fox from the “East Coast of County Durham” opened up the session with his Northern rooted songs delivered in a gritty vocal accompanied by masterful guitar. After interesting but different slots from singers Sadie Jemett and Phil Pipe, the afternoon was brought to an outstanding close with the world class vocal harmonies and songs of Chris While and Julie Matthews. Folk music doesn’t come much better than this.

And so to the evening. Exemplary Blues from Carlisle’s Chris James, who was followed by Hadrian’s Union (more fretless bass and inventive songs) and Katherine Pickering. Then came my personal highlight of the weekend – the consummate musicianship of Jon Brindley from Wigan. His guitar sang, crackled and floated through an eclectic set (memorable for some re-worked George Formby), which also brought the audience to its feet. More astonishing playing was heard from the virtuoso jazz clarinet and alto-sax of Gilad Atzmon in support of the stylistically varied songs of Sarah Gillespie. Rounding off the festival was the pounding double-bagpiped Celtic music of Daimh, combining some gorgeous Gaelic singing with enough vibrant traditional tunes to bring half the audience down to the front to dance us to a close, exactly as instructed on the newly modified road signs!