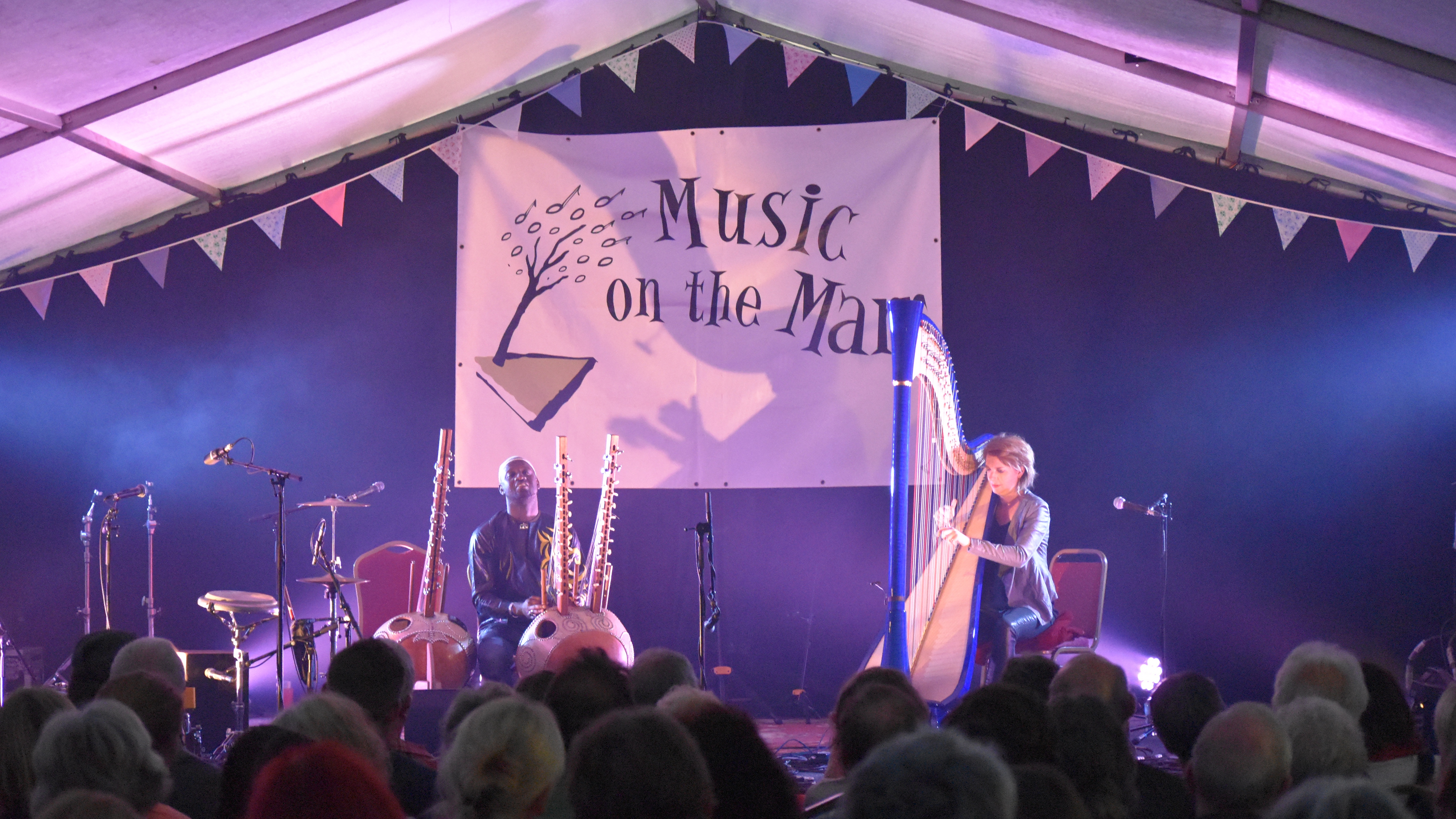 Along with unwelcome torrential rain and wind, fine folk and roots music returned to Castle Carrock last weekend for the eighth Music on the Marr festival. As in previous years there was an international feel to proceedings with Africa in particular admirably represented by the infectious soukous dance music of Kanda Bongo Man and the African-tinged reggae of Zimbaremabwe Mbira Vibes who made it feel sunny even if the weather disagreed. For those festival goers enchanted by such sounds there was the serendipitous opportunity to attend an entertaining talk by the legendary music broadcaster Andy Kershaw who described his part in bringing so-called World Music onto the British airwaves. It's quite a story!

As at every other MoM festival organiser Richard Johnstone mined the seemingly unending lode of exciting Scottish performers around today. A reinvented version of the Celtic-rock pioneers Wolfstone blasted the tent away on Saturday night and were rapturously received while on the final evening a highly talented trio called Talisk came at their tradition from a gentler but no less exuberant direction featuring outstanding concertina work from Stornoway's Mohsen Amini.

There were of course English acts in adundance also. Encouragingly there appears to be as rich a vein of young, highly talented performers this side of the border as there is North of it. There was some remarkably virtuosic banjo playing from Dan Walsh while the affecting singing of Lucy Ward brought a hush to the marquee. The performance of her own composition, Lion, about a WW1 soldier shot for cowardice was memorably haunting. At the other end of the age spectrum was a joyful set from the evergreen Roy Bailey who, as festival patron, performs every year to a packed audience which seems to respond to the hope and humour he brings to music whatever their own political allegiances.

There was considerable local interest to be had this year. Tom Speight and Ian Brown put on a fascinating show combining song, poetry, prose and photographs to tell the story of the construction in the early 1900s of a reservoir in Castle Carrock and the pipeline feeding Carlisle. Featuring on the hardships facing the many navvies involved it was highly illuminating and moving. There was also a storming set from accomplished folk-rockers Hadrian's Union who have played in various guises at MoM since its inception. Now with a new lineup but still headed by Castle Carrock's Stew Simpson, this is the most exciting version yet!

The highlight for me this year was the duet comprising the much lauded Welsh classical harpist Catrin Finch and the Senegalese kora player, Seckou Keita. The marriage of these two ancient instruments and musical cultures was listened to in adoring silence by an audience clearly enchanted by the uniqueness of the sound. The interplay between two such virtouso performers is quite astonishing and creates a new genre all of its own. Their set offered probably the most beautiful music heard at any MoM to date.

The weekend's closing act, The Urban Folk Quartet, therefore had a hard act to follow but did their duty admirably, bringing the house down with a raucous, wild and quirky set of fiddle driven madness to finish off another highly successful Music on the Marr. What a gift to North Cumbrian culture this event continues to be.