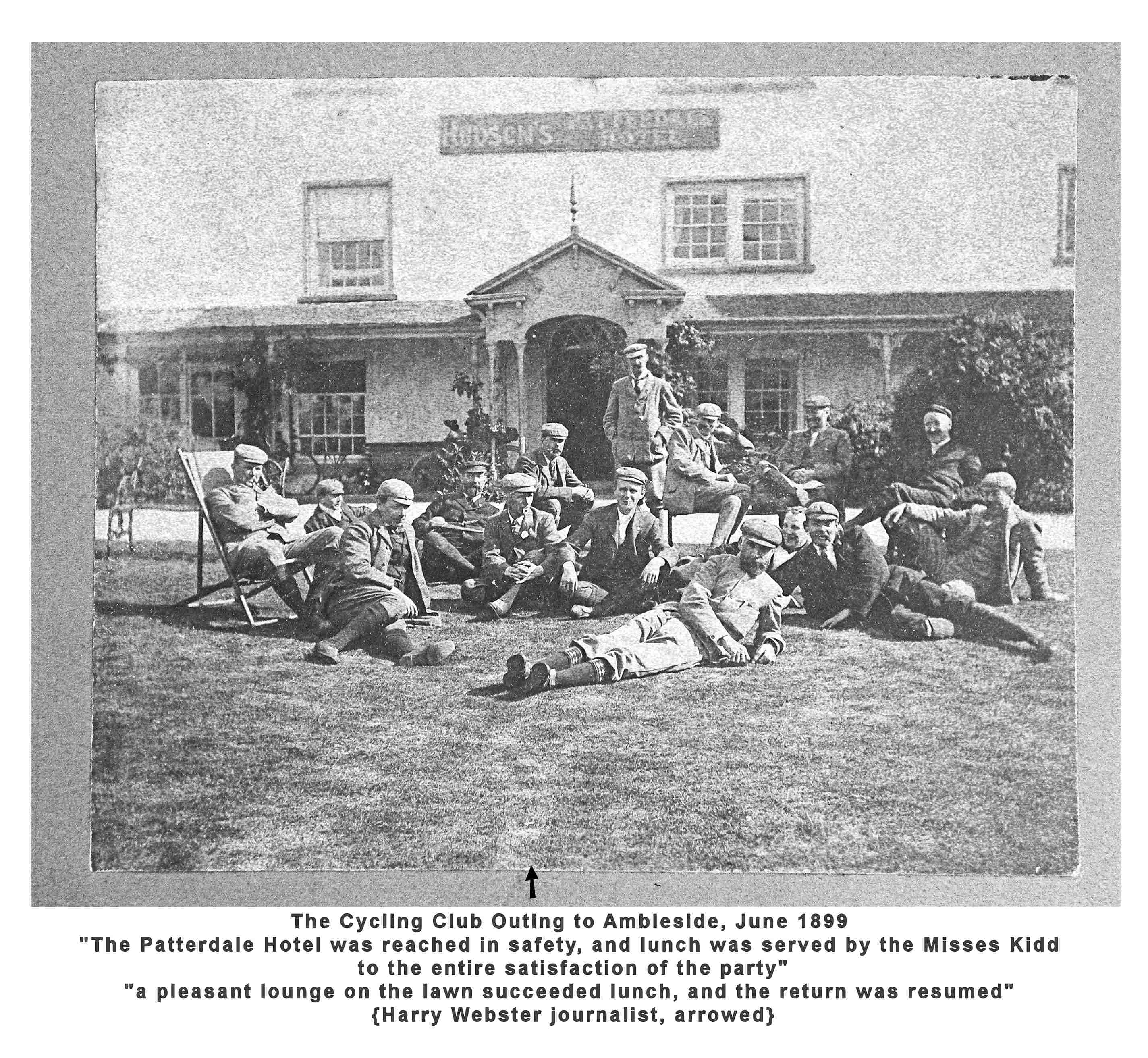 One of the out-of-the-way runs to most cyclists was that taken by the Carlisle Conservative Cycling Club on Good Friday to Croglin. There was a good muster of members at ten o’clock, and with Mr T. Long, the captain, at the head, and Mr J. Satterthwaite, the vice captain, as whipper-in, the party set off on what proved a most enjoyable excursion. They went by way of Brampton and Castle Carrock. Two members accompanied in a trap, being non-cyclists. There was a pause on Rose Hill, where one member had a puncture, and a snap-shot of the repairing operation shows that the whole of the party had an intense interest in it. The repair was successful, and the party bowled merrily along, practically all the members incurring a fine— which it is regretted some have not paid—for having passed the Captain. He, wise man, declined to put himself into a state of perspiration, though he was well-qualified, on his Trent, to lead the lot a dance if occasion required.

It is unnecessary, perhaps, to say that the climb up to Castle Carrock engrossed their attention more than the scenery, because this would not be true. In order to appreciate the vernal beauties of the hilly landscape many dismounted. Some, however, were concerned about the trap and its occupants, who had gone to Castle Carrock by way of Toppin Castle; and they hastened on to relieve the suspense which they knew must be felt on their account. There were mutual congratulations when the reunion took place, and after a well-deserved rest—the journey to Castle Carrock had not taken more than three hours, including the repair of the puncture—all started forward for Croglin, and it is not too much to say that some members who carried more flesh than others were pleased when they had struggled up the last long hill and looked down upon the snug hostelry, the Robin Hood, where they knew Mrs Mason was awaiting their arrival.

The good hostess was on the look-out. it being past dinner time, and she was not long in placing upon well laid-out tables a supply of eatables such, no doubt, as she is accustomed to set down before the sporting gentlemen who stay at the Robin Hood in the shooting season and spend their days on the fells around. The pinched looks and empty stomachs of the party were soon exchanged for jovial faces and tight waist- coats, which were duly placed on record by one of the club photographers, who, it is said, intends to exhibit the souvenirs of this interesting occasion at the next exhibition of the Arts and Crafts Society in Tullie House.

After dinner the snow lingering on the fells was viewed from a distance, and the more active of the party managed to gather a few primroses and tried to catch butterflies—heralds or the spring, which, with the genial weather, were in peculiar contrast with the snow-clad heights. One or two members thought they would take no tea before leaving, but their qualms of conscience vanished when they found they were in a minority, and they courageously resolved to “”perish in the attempt” in order to be level with the rest. Mrs Mason was warmly thanked for her hospitality to the party, and they returned home in good time by way of Carlatton and Corby. Only one accident occurred, caused by the members riding too closely together. Someone’s front wheel caught another’s back wheel, and he came off, but was unhurt.

The route of the run is curiously set forth as follows (leaving out Brampton) : Carlisle, Carlatton, Castle Carrock, Cumwhitton, Cumrew, Corby, Croglin, Carlisle. This is apropos to a club which is known as the Four Cs.

The Carlisle Conservative Cycling Club had their first weekly run on Tuesday night, when a companionable number went by Etterby Street to Rockliffe and returned via the Metal Bridge and Kingstown. The evening was fine and the run was much enjoyed, with The President, Mr Wheatley, turned up to see the party off.