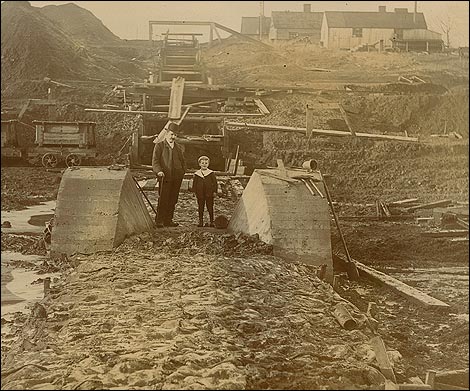 Castle Carrock plays host to a reservoir. It was built at the start of the twentieth century to supply Carlisle with a brand new water supply. Water is collected in Geltsdale, and gravity pulls the water down 21 inch cast iron pipes to the reservoir where it’s collected, treated, then allowed to flow on. It all still works and serves the same purpose today. You can walk around the reservoir in about half an hour.

The reservoir was opened on July 22nd 1909 by the Mayor of Carlisle, Mr W B Maxwell. On that day, the Carlisle Patriot newspaper reported “the event marked the completion of the greatest undertaking upon which the city of Carlisle (corporation) has embarked”.

In July 2009, to mark the centenary of its opening, a small group of people from the village got together to design a weekend of events to celebrate the moment. We organised nature trails around the reservoir and up into Geltsdale, the first Round the Reservoir Race was held, and United Utilities kindly put on tours of the current waterworks site. We also created a weeklong exhibition in the Watson Institute, looking at the history of the building of the reservoir and pipeline down from Geltsdale. Some of the photographs, which were dug out of two engineer’s diaries which were found in Carlisle library, are on the walls of the Duke today. You can also find there some other photographs and text in a folder on the bar. The exhibition was opened by Margaret Carr, the granddaughter of Mr Maxwell. She still lives in Scotby, just to the east of Carlisle, and still had in her sideboard the original silver platter handed to her grandfather by the engineers on the day the reservoir opened.

In July 2009, each household in the village was given a special commemorative Reservoir Centenary mug, as was every child at school. A special limited edition Geltsdale Brewery beer bottle was also created

A 32 page booklet about the history of the construction of the reservoir has been written by Tom Speight – it’s still available for £1 if you contact him at This email address is being protected from spambots. You need JavaScript enabled to view it..