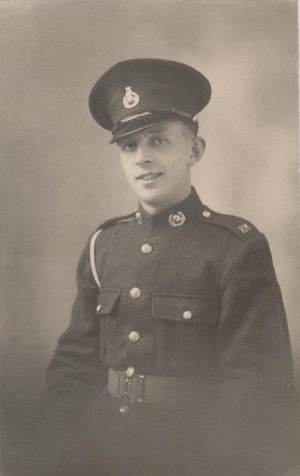 Step through the gate to St Peter’s Church and immediately on the right, as you walk up the path, you will see a single white Portland stone war grave. A simple enough memorial for a local lad, Donald Armstrong Royal Marine, he died in April 1943. Look more closely and you will see that he was only 19 when he died.

So stand the facts. It is the date however which makes you more curious, what event was it in the great cauldron of the Second World War that was to take this young man’s life? Dunkirk had been and gone, D Day was yet to come and the course of the war was slowly turning against the Axis powers; Germany had suffered major defeats in Russia and in the North African campaign. The Allies were beginning to prepare for the invasion of Europe.

In early April 1943 circumstance was to find Donald a member of the crew of a newly commissioned landing craft LCG (L) 16. She had been converted at Harland and Wolff’s shipyard in Belfast from a vessel designed to carry tanks for beach landings and was under orders, in company with a small flotilla of similar craft, to sail from Birkenhead to Falmouth via Milford Haven.

Landing Craft Gun (Large) or LCG (L) were the brain child of Winston Churchill and were on the secret list even after the war. Consequently not many people have even heard of them. They were to become part of Combined Operations under Lord Louis Mountbatten. LCG’s were intended to be first in line of battle to take out shore defences allowing troops to be landed safely, able to get in much closer than the bigger ships could.

The first twenty LCG were converted from Landing Craft Tanks (LCT’s) in dock yards around the country, a new deck being constructed over three quarters of the length of the formerly open craft. On this deck were two gun turrets offset to the sides, carrying Army 25 pounder or 17 pounder guns. They also carried Oerliken anti aircraft guns for defence. Royal Marines manned all these Guns and so we can assume Donald, as was probably a gun crew member. The craft was designed to engage enemy pillboxes with direct fire and was consequently carried armour plating up to 2 inches thick. All of this weight and the addition of the guns meant the centre of gravity was high which lead to them rolling alarmingly in heavy seas.

The first two craft to be finished left Belfast at the end of March for Falmouth, but they had a serious design flaw which would prove to have fatal consequences. The forward end of the tank deck had been left open with the bow door and winches in a fully usable condition. The tank deck of an LCT had a series of drains running down to a duct keel, which could be pumped out. Although watertight bulkheads had been fitted the drains had not been sealed off so, in effect, there was no real water tightness..

An account of life on board these ships and an indication of the concerns of at least one experienced seaman are provided by Harold Dilling, he was linesman on board LCG 19 (Landing Craft Gun 19) which was also in the flotilla heading south that April. It was to be home to Harold for over two years and it would take him into many very hazardous situations both natural and man made. As they set sail from Birkenhead to Harold had expressed some concern to his First Lieutenant about the seaworthiness of the craft. Harold had acquired considerable knowledge during his marine engineering apprenticeship and he thought the open foc’sle area, which which had not been decked in, would take in huge quantities of water in heavy weather with the distinct possibility of overwhelming the pumps. So we have a vessel converted to a task she was not designed for, top heavy and not watertight. His concerns were to be put to the test later in the voyage and sadly proved correct. Harold was to be lucky, Donald was not.

As the flotilla headed towards Milford haven they began to encounter severe heavy weather off the Pembrokeshire coast. Gradually the storm got worse and a decision was taken to enter Fishguard to ride it out. For reasons we will never know they were refused permission to enter the harbour and were left with little choice but to press on to the south and round St Ann’s Head and into the safety of Milford Haven. They were not to make it.

No doubt this was a fierce south westerly gale, probably Force 10, driving mountainous seas up from the south western approaches out in the Atlantic unhindered until breaking on the sandstone cliffs at St Ann’s Head.

To avoid the rocks and shoals of St David’s Head and the islands of Ramsey and Skomer the flotilla would have had to have headed well out into St George’s Channel exposing them to the full force of the storm. It would have been terrifying for those not used to these conditions and even more frightening for the fact that the poorly designed vessels were now beginning to take on water at an alarming rate. The pumps, as Harold Dilling had predicted, were overwhelmed by the quantities and eventually LCG 15 and 16 began to founder. They radioed for help but were told that Angle Lifeboat, located at a station within the Haven, was out of action.

Inexplicably it took the Coastguard a further six hours before calling out St David’s Lifeboat, they were located much further north across the sweep of St Bride’s Bay and facing a punishing slog into the teeth of the gale. It was to take them two and half hours to get to the landing craft but by that time it was dark and without the ability to use lights in wartime little could be done. LCG 15 was separated from her companion and was the first to sink, going down on the 25th April somewhere off the western most islands of Pembrokeshire.

Donald Armstrong was a crew member of LCG 16 and his torment was to last many more hours as she struggled on towards safety. In the meantime and elderly fishery protection vessel HMS Rosemary, probably based at Milford Haven, was sent in a belated attempt to assist. Upon reaching Landing Craft, L.C.G.16, she launched one of her boats. Sadly the six brave men on board were soon to be drowned as the boat overturned in the mountainous seas as they fought their way towards her. Soon afterwards L.C.G.16 also succumbed to the storm and sank herself with the loss of all hands, including young Donald Armstrong. Altogether 79 men were to lose their lives over those two days, 73 onboard the ill-fated LCG’s and their 6 rescuers from the crew of HMS Rosemary. Some of the bodies were washed ashore in Freshwater Bay in the coming days, and were buried in various cemeteries, many at Milford. Several bodies were never found, and the site has been classed as a war grave. Today there is a memorial in the car park at Freshwater West and a larger war memorial in Milford cemetery.

The episode resulted in all remaining LCG’s to be recalled for modification by having the remainder of the open decks closed in. Eventually they rendezvoused at Falmouth and left for the Mediterranean in June 1943 for the invasion of Sicily-Salerno-Anzio. They were to return to home waters for D Day and fulfilled their purpose in support of the landings there.

So as you walk the path to the church pause and reflect a moment on this brief and probably unreported episode in the story of the war. Consider the terror and violence of a violent storm at sea and imagine yourself onboard a small craft totally unsuited to the conditions she now found herself in.

Say a few words for Donald and thank him for his sacrifice.