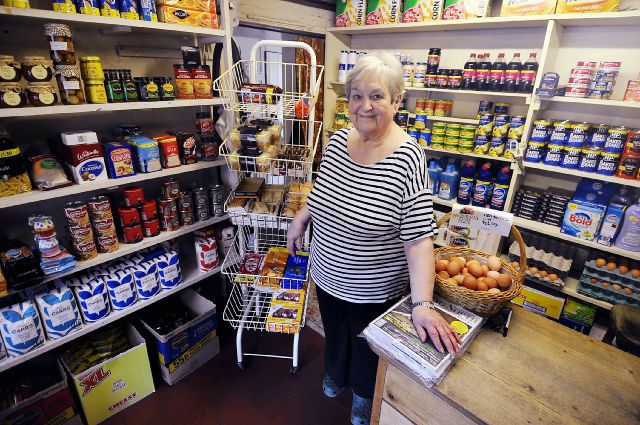 Margaret Harrison’s life was devoted to her family and her village community. Her sudden death at home on 14 February 2016 leaves a very large gap in the life of Castle Carrock which cannot be filled.

She was born on 3 August 1933 to Clara and Harry Mason at Clara Cottage near the school at Castle Carrock. Brothers John and Arthur followed. They were a close family; grandparents and aunts were in the village and she spent lots of time with them often singing together.

When she left the village school she worked at the Weary Sportsman Inn and loved it.

When Margaret was 17 she met Bob Harrison in the Lonsdale Cinema while he was doing his National Service. They went on Saturdays to the Cameo in Carlisle and were married on 3 February 1955, in the morning – Bob, by then a professional footballer with Carlisle United, had to play in the afternoon. He scored a hat trick.

At first they moved into Castle Carrock but Bob was soon transferred to play for Stockport County so they moved to Manchester where Margaret loved the new social life. Soon the children came along: Stephen 1955, Phil 1957, Julie 1958 and John in 1960.

Bob retired from football in 1969 just as Castle Carrock village shop and post office became available, they took it, moved back to the village and ran a thriving business. Bob was sub-post-master and Margaret kept the shop. Later on when Bob’s post office career progressed she became sub-post-mistress herself.

They immersed themselves in village life. Margaret was a supporter of the Church, on the flower rota, a member of the Parochial Church Council, an active member of the Women’s Institute and the village Young Wives Group. All her young sons were becoming professional sportsmen and she provided clean laundry and meals at all hours. She was an accomplished cook; her Sunday roasts became a thing of legend and often shared with her neighbours. She enjoyed trips out with family and friends.

Margaret was less about business and more looking after people. Many children with not quite enough money found that they got what they wanted anyway. It is believed more sweets were given away than were ever sold. All her children left home in the same year and her mother, Clara, moved in; Margaret looked after her for 17 years.

In 1999 an attempted robbery in the middle of the day by a woman in a mask and a machete in her hand, overpowered by Bob, seriously undermined her confidence – for a while.” I have to go on” she said, “people expect it of me.”

She was behind the counter for 47 years. Always cheerful and pleased to greet every customer, asking about family and remembering the names of friends she may have met only once. She was a fount of local knowledge about what was going on in and around the village. She was also the sole of discretion and was never a gossip. A Mum for the village full of kindness, agony aunt, confidante, best friend.

Her health was not good in recent years but she was reluctant to close the shop early for a doctor’s appointment as she thought she was letting people down.

Margaret loved music and had a CD player in the shop to fill the quiet moments. A song written by Fred Small and sung by Roy Bailey, ‘Everything Possible’ was a favourite. It ends with “…and the only measure of your words and deeds will be the love you leave behind when you are gone”. The 300 hundred people who turned out to say a fond farewell at her funeral at Carlisle Crematorium on 25 February 2016 is a testament to that sentiment.