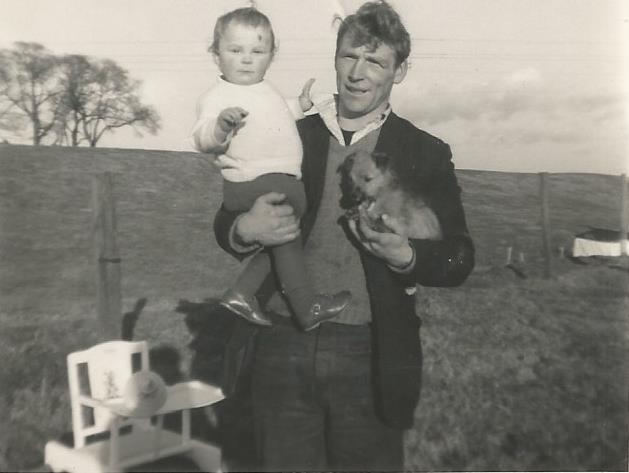 Sam was born 17th June 1942 to James and Mary Brown, he came into this world at Gilsland Convalescent home (during WW2 it was a hospital) and went back to the family home at Low Hynam. And some family it was, there were 16 of them altogether 12 boys and 4 girls and Sam was the 14th to be born. The family moved from Hynam to Bank House over the road from the Duke of Cumberland and after the bad winter of 1947 they moved to the newly built council house at the entrance to the village where Sam and Rhona were later to spend most of their married life. This was an interesting design, the two semis had the bedrooms were shared out rather differently from normal with 5 bedrooms being allocated to the one Sam’s family lived in and only one next door! This was gradually put back to the standard layout as the family left home.

Sam went to the village school and on to Irthing Valley in Brampton, he left school at 15 and had numerous jobs, never being out of work. He started with farm work and then spent time on the Duke of Buccleugh’s estate training to be a gamekeeper, he loved this job and might easily have stayed there if he’d been paid more. He also worked on the railways for a short time, at the Gypsum mines at Cocklakes and for a timber firm. He used to recall the day he was driving a horse which was dragging logs out of woods and he and the horse stopped for lunch. He fed the horse, sat down under a tree to have his own lunch and nodded off only to waken a while later to find that the horse had disappeared. After a moment of panic he decided that he needed to go back to the yard and own up and was much relieved when he got there to find the horse calmly standing outside its stable with the log still chained to it. Despite his love of outdoors he had a family to support and spent most of his married life working in the print industry although it came as a bit of a surprise to him initially as he thought he was being offered a job in the Sand Quarry at Hardbank and ended up at the Carlisle Journal offices

As a lot of local lads did Sam would travel quite a distance to local dances and he met Rhona for the first time at a dance at Nenthead. Rhona was working at Newton Rigg at the time and had come home to Alston for the weekend , it was also the first time she had been allowed to go to one of these dances so maybe fate played a hand! At that time Sam , like many of his brothers, got around on a motor bike. There was always a bike of somebody’s in bits at the back door at home. At weekends he would pick Rhona up at Newton Rigg and go up to Alston via Hartside with Rhona riding pillion, Rhona recalls the time they set off in the snow and by the time they got to the top the road was blocked so they had to turn round and go all the way back down only to find that somewhere along the way they had dropped the bag in which Rhona was carrying her high heels. Not to be daunted Sam set off all the way up again and they found them right at the top where they had turned round. The romance continued and they got married on 2nd October 1965, the following year Mark came along and then 17 months later Fiona arrived.

Married life started at Castle Carrock living with Sam’s parents and when Mark was 9 months old they bought a 28ft caravan which they had at Tarn End hotel for a while before they moved it to Hallbankgate. By all accounts the move was a bit hairy but the van and all its contents eventually arrived safely at its new home. This wasn’t the ideal home though and just after Fiona was born they got the chance of a house at Milton where they stayed until the late 60’s when, to help Sam’s parents who were both ill, they moved back to live in the family home where they have been ever since.

Some of you may be wondering why Sam wasn’t called by his “proper” name of Colin, seemingly this stems back to when he was a young boy playing with some other lads from the village and they had to move something quite heavy, no-one seemed to be able to move it until little Sam came along and managed it and as if to explain why he was stronger than the rest he stood and flexed his little muscles and said “Spam not Jam” (it was war time and Spam was often the only meat available), one of the little boys misheard and thought he said Sam not Spam and the name stuck with him after that.

Searching for words to describe Sam the person wasn’t difficult. He was a quiet, unassuming family man who liked people. He had a ready smile and had time for everyone and enjoyed a good crack. Sam was always busy, he was one of the first to be there if anyone needed help and never expected anything in return. He loved his family especially his 3 grandchildren Thomas, Emily and young Sam who all delighted in his company as much as he did in theirs. Granda was always great fun, Thomas loved being able to come and soak Granda with the hosepipe and Emily and Sam loved to race to see who could get Granda’s wallet out of his pocket first.

Sam had a number of passions and interests. He was an outdoors man who loved the countryside (especially around Castle Carrock), enjoying shooting and fishing and his dogs and he was very knowledgeable about wildlife in general. One of my early memories of Sam was Pete and him going off feretting to catch rabbits, Rhona can remember making lots of journeys to the game merchant in Haltwhistle to make sure they got the best price for them after. At one time he reared his own ferrets and had 13 of them which a toddler Mark took great delight in letting out on more than one occasion. Sam loved pottering and dabbled in lots of things. At one time he reared pheasants for a shoot of which he was a member and at home he had a hen run where he kept a variety of hens, geese, ducks and ferrets. For a few years Rhona spent a significant amount of time in the days before Xmas cleaning and plucking ducks, maybe not the ideal Xmas present! He loved his dogs and until very recently there was nearly always a black Labrador in the family although he started off married life with Midge, a terrier, and in more recent times there was also a West Highland terrier. Despite the fact that he wasn’t the world’s most enthusiastic gardener (although he did always cut the grass) he spent many hours with Rhona going to garden centres and often he would just smile and shake his head when she bought another plant and wasn’t really sure where it would go.

Sam had a variety of vehicles during his life. As mentioned earlier he rode motor bikes when he met Rhona and they got by with a bike for a while after Mark was born even managing to go to Alston one day with Rhona on the back carrying a baby Mark and a kitten. When Fiona was on the way they decided that they needed a car and Sam bought a Blue Bond 3-wheeler (a bit like a large Robin Reliant). This wasn’t just used to take his family out and about, there were also some very hairy trips up the road from Castle Carrock to Newbiggin on a Saturday night(with most of the bends being on 2 wheels) to catch the extra half hour opening time (Newbiggin was under Penrith licensing authority). The family progressed to what might be called more run of the mill cars and Sam eventually got his 4 wheel drives which were great for getting a better view of the countryside. Sam gradually bought one or two fields and with them came the tractors, over the years he had 4 in all and Rhona can remember asking him at one point if he really needed another tractor to which he replied “Do you really need another ornament?” He loved dabbling in farming, one year he had a new field which he decided to plant with potatoes. He only did it once as what he hadn’t bargained for was the amount of time and effort involved to pick them and how many there would be, a lot of us were commandeered at weekends and there was an endless supply of potatoes! He had one or two sheep for a while and then moved on to his logs and did a bit of fencing, eventually he also had a small digger which he hired out. A man who wasn’t frightened to turn his hand to anything! As the years went by he started to use machinery rather than tackle more physical tasks, though he sometimes had a bit of a disregard for health and safety and there were one or two lucky escapes.

Until the last couple of years, when he wasn’t well enough to do it, Sam was a regular in the village pub, he didn’t miss many nights and he loved the chat and the banter. He would go straight to the Duke of Cumberland on his way home from his 2-10 shifts at the print works and the publican would have his pint waiting on the bar for him when he walked in.
Sam loved the village and the surrounding countryside but Rhona and he were also very well travelled. Their first trip abroad was to Malta and after that they went to Australia twice (to visit Sam’s brother and sister David and Jean and families), America 3 times, S Africa and Canada.

Was there anything he didn’t like? Well he couldn’t stand soaps on TV, in fact he used to tell Rhona that there were so many that it was a wonder there weren’t bubbles coming out of the TV set! Except for wildlife programmes he didn’t watch a lot of TV as he spent most of his time pottering outside but he always had the radio on, it was turned on first thing in the morning and stayed on all day. He loved music especially Country and Western and the Pan Pipes and some of you might be surprised to know he actually quite liked the Rolling Stones, he did one of the best Mick Jagger impressions I’ve ever seen!

Sam bore his illness over the last few years very bravely and never stopped having time for people. I’m sure we all think he was taken from us too soon and he is going to be missed by a lot of people, his family and his friends in particular but the village has also lost a character, everyone knew Sam and I know that we’ve all got some fantastic memories of him. There’ll be tears today but I know that there will be lots of fondness and laughter when we remember him. Sam died on 20th April 2015.